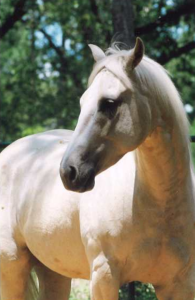 My beloved horse Harvest Moon, affectionately called Harvey, was euthanized on Thursday, April 24, 2014.  Harvey was born March 11, 2003 to a three year old filly I had purchased who carried a big surprise – a gorgeous colt, the cutest baby animal I had ever seen.  It was love at first sight and the next 11 years and one month would be amazing.  Harvey was simply magnificent.  I was fascinated by him from my first sight of him.  As a colt, he would come to eat a small bowl of oatmeal from my hand and then turn around to present his little butt to be scratched, looking over his shoulder at me to make sure he was in position and I was ready to do my job.  He followed me around to see what I was doing.  When I was cutting yaupon and dragging it to a burn pile when Harvey was about nine months old, he would follow and step on the yaupon like a kitten chasing a string.  As he grew he was a joy to behold and his beauty filled me with such pleasure and peace, as anything beautiful in Nature will do.  There is nothing more beautiful than a magnificent horse running with the wind in his mane and tail – nothing.  I came home from work and spent time with Harvey – it made my world a peaceful place. Harvey was a silvery coated palomino.  I always said he glowed in the dark because his coat reflected every tiny ray of light, even on a moonless night.  He was a spirit unto himself – so inquisitive and fearless, he would approach anyone or anything.  He wanted always to see what was going on in his world.  He came when I called for him and usually at a thundering gallop.  He was so dominant and fearless he was hard to train.  In my first round pen, he would do what I wanted for about three minutes and then jump out and gallop gleefully away.  I had to get a much taller round pen.  He tested me constantly to make sure I was up to the task of being his leader – this old lady who indulged him so much – no wonder he questioned that one.  We rode in a fun drill team and were training in Western dressage.  The bond between a horse and a human sometimes goes beyond the usual and only a person who has had that relationship can appreciate the depth of that bond.  I felt what Harvey felt and he felt what I felt.  He waited at the gate for me to come home every day – except one.  When Harvey was injured in September of 2013, it began the nightmare of all nightmares.  Each day I did not know whether he would survive.  Putting him down was the hardest thing I’ve ever had to do.  He suffered so much as I tried everything to save him, remaining so sweetly accepting of each painful surgery and procedure.  I won’t have another horse because I couldn’t.  There will never be another Harvey.  Horses live 30 years or more so I have lost 20 years of my beautiful Harvey.  He was supposed to be there with me in my retirement years when I could have devoted more time to him.  I will miss him every day, miss hearing his thundering hoof beats approach, miss watching him in all his beautiful, glorious magnificence, miss spending time with him and riding him, and most of all miss him waiting for me whenever I went out the back door or drove in the driveway.  My heartache at his death is unbearable.   My beautiful Harvey, I will see you again in heaven.

No heaven can heaven be, if my horse isn’t there to welcome me.
Author unknown